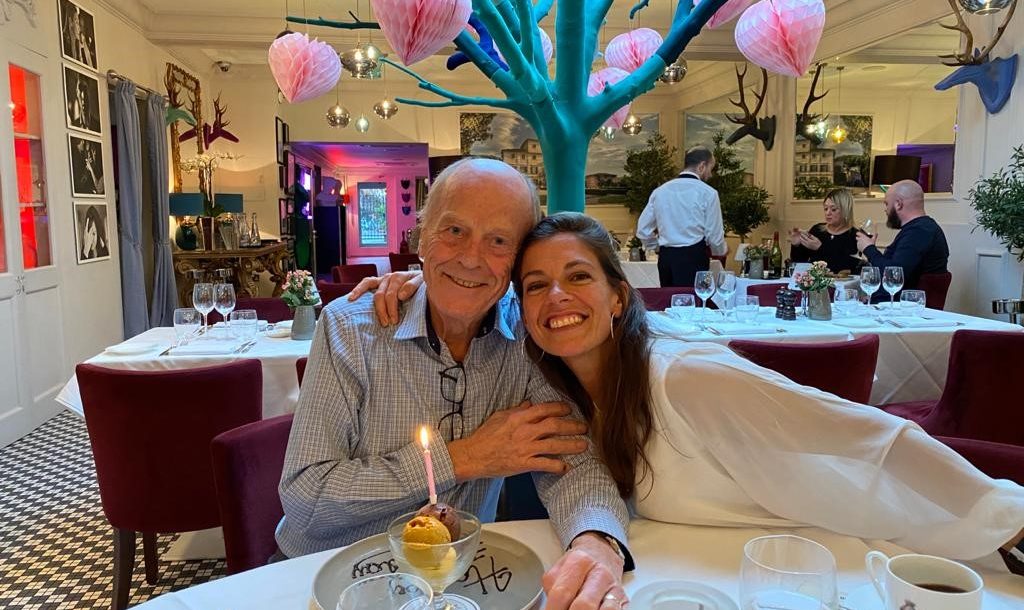 Katharine and her dad, Michael, were a real unit. He was always there for Katharine, so when it came to his diagnosis of lung cancer, she was there for him – and so were we.

“My dad and I were always extremely close. I can honestly say that for every single second of my life, I always felt completely loved and that he was always there for me. Dad made the most of absolutely everything in his life – his dry sense of humour always lightened any mood!

He gave blood for over 60 years and was hugely passionate about it, he even received an award for over 100 donations. Dad had a lifetime of excellent health – I don’t remember him ever being unwell, so when he was diagnosed with lung cancer aged 79, it was a massive shock to the whole family.

His symptoms and diagnosis

My children adored my dad and he them. He was always full of energy, time and love for them. But when they returned from staying with my parents in the summer of 2019, they told me that Grandpa had been very quiet, low energy and not himself at all. My ears pricked up because I knew it was so out of character.

Both my parents had just got over a summer cold with a cough prior to the children staying. My mum’s cleared up quickly but my dad’s didn’t. My mum and I were concerned and told him to see his GP straight away which he did.

Thankfully, we were really lucky because his GP referred him straight away to a lung specialist. They took an x-ray and saw a very small black ‘blot’ in his right lung with some fluid around it. The specialist thought it could either be a sign of the infection he’d just had, or could be something more sinister.

Dad was referred for some fluid drainage along with an ultrasound a few weeks later. When that appointment came around, the fluid had reduced rapidly and his cough had subsided- thankfully he was also feeling much better in himself. We felt hopeful that it was just an infection and was clearing up. However, the lung specialist consultant still persisted and suggested that they carry out a bronchoscopy to take a biopsy from the small dark mass just in case.

He had the bronchoscopy in September 2019 and very quickly, my dad was called in by the lung specialist who confirmed he had lung cancer.

I was cycling home from work when I saw my parents’ phone number flash up on my phone. I stopped immediately to answer the call and I remember hearing my mum crying. She told me it wasn’t good, and it was ‘the Big C’. I remember feeling as if the bottom of my stomach was falling out. I stayed there at the side of the road for nearly half an hour, sobbing and wishing that this wasn’t happening to my beloved dad.

When Dad was diagnosed with lung cancer, I knew that I wanted to really understand what the disease was and what could be done to help with it. I wanted to feed a positive narrative and not a negative one. My dad had always been so positive for me throughout my life and so I wanted to be positive for him.

Whilst looking for charities that specialise in lung cancer, I came across Roy Castle Lung Cancer Foundation, and they were just what we needed.

I sat with my dad and showed him some patient videos and read him some of the articles. Their stories were positive, realistic, hopeful and took away our fear.

I spoke to the nurses on the Ask the Nurse helpline quite regularly throughout the pandemic. We didn’t know who to get help from as every other avenue became closed due to the lockdowns.

Roy Castle Lung Cancer Foundation were a lifeline to me during this incredibly uncertain time.

For me, I have always felt that everyone in Roy Castle really understands what this disease does, how it makes you feel but also that it’s not always doom and gloom. I learned to shift my perceptions about lung cancer, and indeed cancer in general. I took real hope from the phrase ‘living well with lung cancer’ and I tried to keep my dad positive with this way of thinking too.

The oncologist offered my dad four sessions of chemotherapy and immunotherapy with the hope that he would remain on immunotherapy for 2 years until the cancer was at bay. However, on 13th March 2020, we learned that the treatment hadn’t worked and they wouldn’t be continuing with it – we were so disappointed. Lockdown then happened and thankfully, he was still offered 12 sessions of radiotherapy.

Once the radiotherapy was completed in late April 2020, his scans showed that the tumour had hugely and significantly reduced. We were elated and my dad went on to have an active and happy summer, returning to play 18 holes once more of his beloved golf.

However, in the back of our minds, my family and I were always a bit nervous about the cancer coming back, so when a lump appeared on his back and on his side at the end of August 2020, I just knew that the cancer had returned, and this time it was growing rapidly.

My dad is the first person I’ve lost who I loved as much I did. To say it broke my heart is an understatement. Nothing really prepares you for it, despite thinking how prepared you are.

If you or any of your family are experiencing any symptoms of lung cancer, I can’t say it enough – go go go and speak to your doctors. You know yourself the best, always trust your instincts.

Roy Castle Lung Cancer Foundation helped us find a light in the darkness during my Dad’s illness, so I am proud to give back by supporting them with a monthly donation. Plus, in August 2021, I will be taking on the London Landmarks Half Marathon in memory of my lovely dad, to raise funds for the lifeline that is the Ask the Nurse service.”